Screening of the film Untouchable 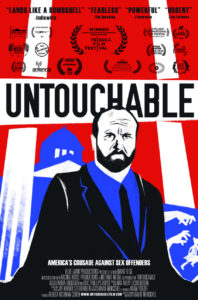 After discovering that a nanny has sexually abused his daughter, the most powerful lobbyist in the state of Florida harnesses his extraordinary political power to pass the toughest sex offender laws in the nation.
“Untouchable” is a film that pushes viewers toward an uncomfortable place, requiring them to walk in the shoes of those who have suffered sexual abuse,but to still bear witness to the experiences of those we most fear. This film was directed and produced by David Feige.

The film will be followed by a Panel Discussion about a Restorative Reintegration Program called Circles of Support and
Accountability (CoSA) available to sex offenders coming out of prison by Community Justice Centers across Vermont.

There will also be time for Q&A about the situation here in Vermont.