Carl has been volunteering at the LRJC for four years. During this time he’s served on restorative boards as well as a CoSA team. Currently, he serves only on a restorative board. Carl has lived in Hyde Park for ten years.  He feels like it’s much longer though because he and his wife Diane have been coming up to the area since their college days. Their kids learned to ski at Stowe and before they built in Hyde Park they owned a condo in Stowe.

We asked Carl to tell us more about himself. Here’s what he told us:

What is your motivation to be part of the work at LRC?

Well the short answer is that I believe everybody deserves a second chance.  I see the diversion process as a great alternative to the court process. It allows people who have committed less serious offenses to be adjudicated at an appropriate level while more serious offenders can be processed through the formal court system.  Now the story that goes along with my decision to participate dates back to my work days.  I worked for a large financial services company and at one point I had and individual working for me that had a great future ahead of him.  He had worked as a CPA and was in a management training program. During a serious lapse of good judgement he committed a crime that resulted in him being charged with and found guilty of a felony.  Because of this he immediately lost his job and ended up spending time in prison. The conviction also guaranteed that he would no longer work in financial services and will adversely affect him for the rest of his life. After moving to Vermont, while discussing this story with some folks at the LRC, I was told, had this occurred in this State, that it was very likely that this individual’s case would have been referred to Court Diversion.

What do you do for work and play?

Well, as I mentioned earlier, I’m retired. Before retiring I was the Vice President in charge of real estate and facilities operations for a Fortune 90 financial services company. I believe that I’ve been incredibly fortunate in my life and believe that I should give back and as such I currently am on the Copley Hospital Board of Trustees.  In the past I’ve also served on the Lamoille North Supervisory Union School Board as well as other nonprofit organizations.  In my spare time Diane and I like to travel. We’ve just had our second grandchild and try to spend as much time with them as we can. With my remaining free time I enjoy gardening and reading nonfiction. 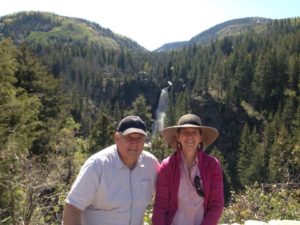 Carl is able to bring unique perspectives from his background and involvement in our community. He skillfully connects with participants in the restorative process through storytelling and kindness. We appreciate his dedication to our agency and the work that he does here.

Many thanks Carl for your service and support!